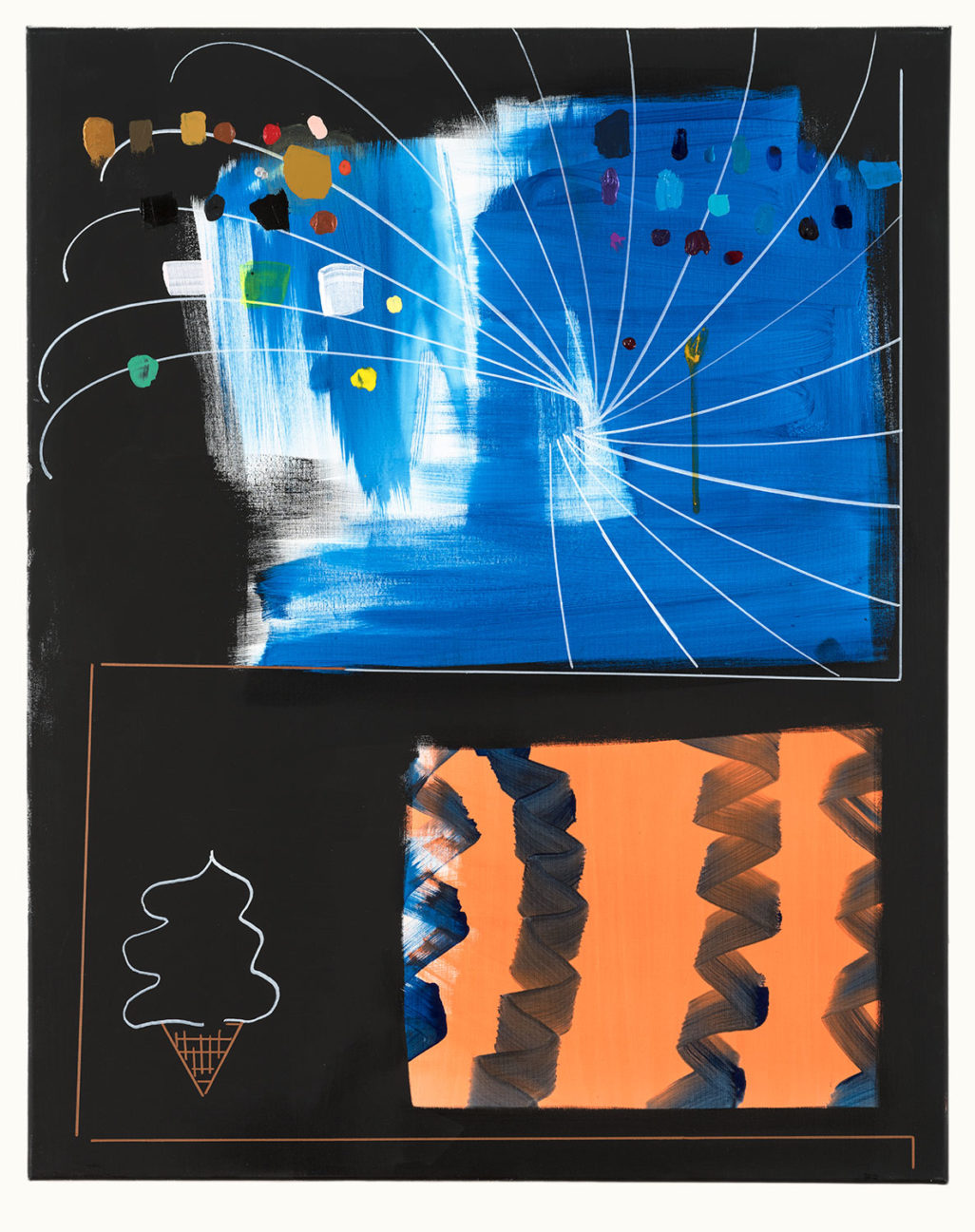 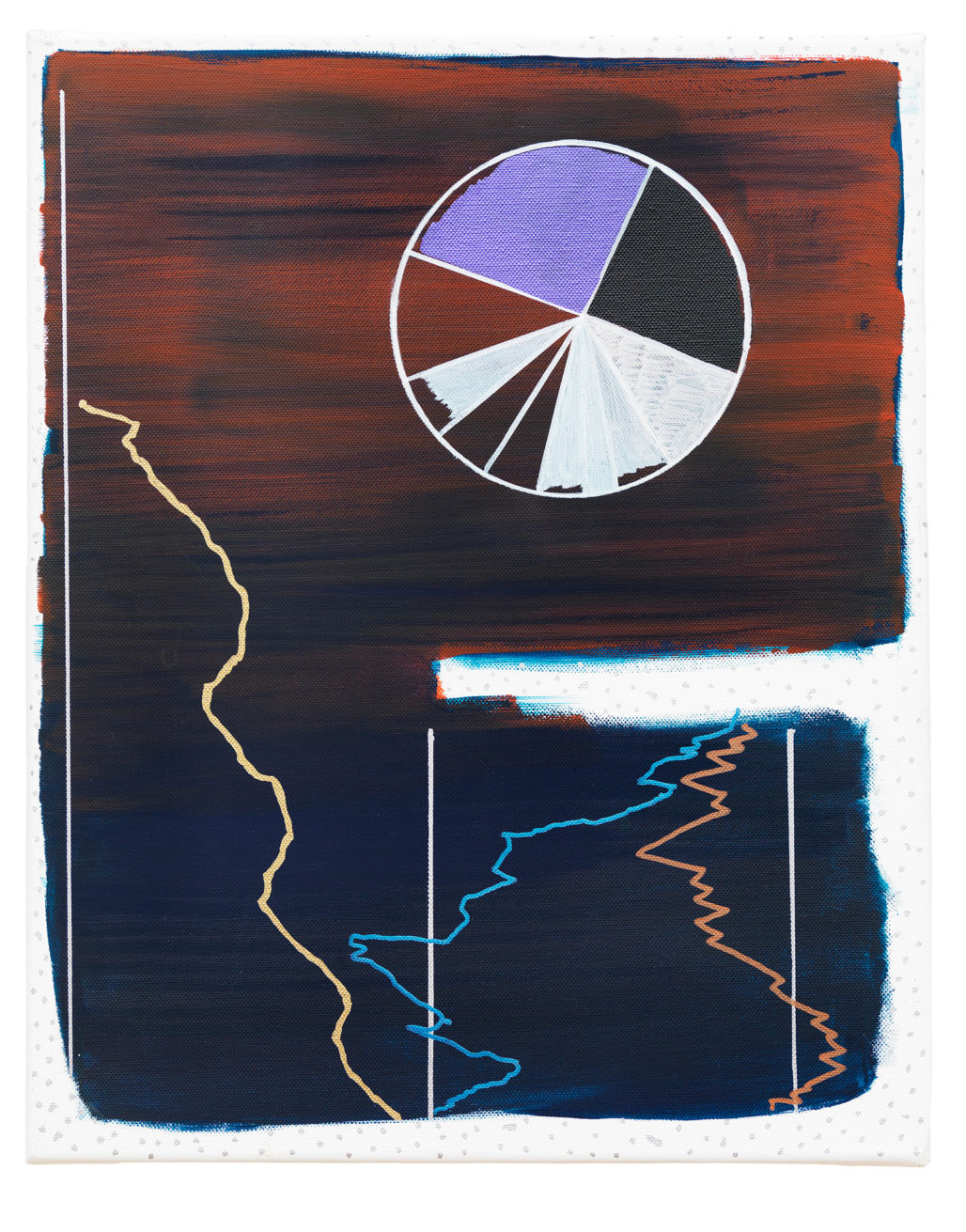 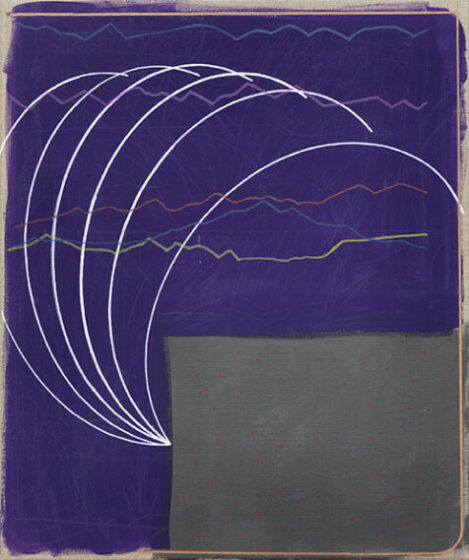 This slogan was adopted by performance art troupe COUM Transmissions in the mid-1970s. COUM soon mutated into the pioneering noise group Throbbing Gristle. By the time I heard them in the late 1980s, they were ancient history, but true to form, their tinny, warbling sound was profoundly disappointing to someone accustomed to the more fulsome and ultimately conventional noises of Swans or Einstürzende Neubauten.

Jasmine Justice’s paintings never fail to disappoint, because, like Throbbing Gristle, they disallow a secure understanding of what painting can be, precisely within a discourse where the furthest reaches of visual and conceptual coherence have long been breached. Justice’s remarkable accomplishment is to create this feeling of non-recognition with paint and canvas. It is in her very touch and configuration, in one painting and the next where her voice is most vivid, and therefore most difficult to parse. This is because that voice is one of belligerent passivity (which is not the same as passive aggression). With an obverse plentitude that has nothing to do with the cultivated nonchalance and cheap provocation making headlines of late, Justice offers gauche masses, sprinkled zones and insistent line-work that together refuse the bombastic gestures—in paint, format, or attitude—to which she is heir.

Robert Ryman gave this title to a number of paintings that explore texture, layering, and other conditions of plentitude, without a hint of negation. I bring up negation not because of Ryman’s white, but because the layering of tape and paper in the art of collage, which Justice also practices in wall-and-floor-bound works, must invoke, for an artist educated after the 1980s, not the “plasticity” and “monumentality” to which Greenberg points, but rather Krauss’s semiotic bent, wherein “The field is thus constituted inside itself as a figure of its own absence, an index of a material presence now rendered literally invisible.” Collage, according to Krauss, works “against modernism’s search for perceptual plentitude and unimpeachable self-presence.” Krauss is correct inasmuch as Picasso’s collages work away from representation, but one hundred years on, when both representation and abstraction have been so thoroughly negated, the primary act of Justice’s collages is not obfuscation or negation, but positive proposition of elements in the unlikeliest of relationships. As if to test the resilience of this positivity, Justice literally holds The Hunger together with a universal sign of negation, a white X that secures a pile of black cutout zigzags alongside two other pieces that are somehow both whole and fragmentary. Here again comes some of the anti-graceful disappointment mentioned above, as Justice travesties Matisse’s cutouts into something that, against all odds, preserves their vitality and majesty, miraculously without snark. Unlike Krauss’s vision and similar to Ryman’s, the bits and pieces Justice places together are themselves gestures, and gesture is one of the most problematic–that is to say, productive–elements in painting.

Years after the fact, Throbbing Gristle’s guitarist characterized her slide-driven squalls in the song Persuasion as notes of resistance in counterpoint to its lecherous lyrics. The professed meaningfulness of the isolated chunks of guitar noise at the precise historical moment (punk music and fashion, postmodern art and theory) when so many cultural memes were undergoing semiotic estrangement and nullification provides an instructive parallel with Justice’s work in opposition to some other abstract painters. Richter, Lasker, and Greenbaum, for example, are duly celebrated for having engendered recognizable visual worlds. It is not at all certain, however, whether a stroke turning this way or that, a nub placed here or there, or a branching network’s precise color or direction would matter within one of these artists’ quirky fields. In Justice’s paintings, the opposite is true. Each element is distinct and necessary. Krauss’s account

of collage is that it “signifies or represents” its own picturing, thus creating an analytical distance that has gone on to pervade abstraction. The alternative is not hot-headed expressionism, but as we have seen, effective agency remains possible on a local level. Here is where Justice opposes the drift of painting today by making each mark a cry of protest by virtue of its immediate environment. It creates, not a literary, narrative meaning, but a visual one.

Justice’s accumulated tracings of antiquated draughtsmen’s tools and divided pie charts seem to promise quantifiable information but deliver only flagrantly intuitive imagery, such as a fan of white curves radiating from a single point, strikingly far from the still-prevalent impulse to the all-over.  It is amazing how steadily the pull of the all-over is felt, and how its violation still stops us short.  She shows that one of the most transgressive things one can do is to stake one’s work’s identity, one’s works’ identities, on the musics of each composition, on the things that one makes happen in each picture, and she does it not only with the mark (and not necessarily the gesture, but the incremental, indirectly handmade form), but also with and through collage. Collage, for Justice, conditions but does not absorb her paintings. Things are imported and juxtaposed, but the cut does not reign supreme, and disjunction does not wield a conceptual hammer across her compositions.

3. Rosalind Krauss, “In the Name of Picasso,” The Originality of the Avant-Garde and Other Modernist Myths (Cambridge and London: MIT, 1985) 37, 38.